I found my third crew...a natural. And he knows just enough about sailing to think that I know what I'm doing! 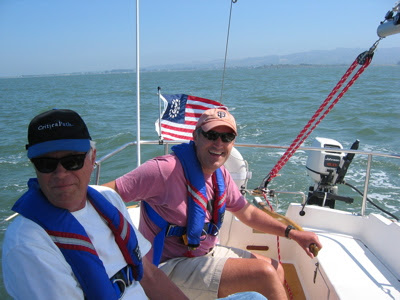 We went out early Saturday morning expecting light winds in the 5-10 knots range and were pleasantly surprised to find 15-20 once we got out to the middle of the Circle. BG was able to hold a straight course, the crispy new sails were filling perfectly and the GPS was cranking out numbers in the mid-5s on the beat out from the marina.

When the winds hit the high teens (confirmed via Sailflow), I took over the tiller, took us through some tacks, a few jibes, and started getting "The Crew" whipped into shape (fenders had been stowed promptly after leaving the slip mind you). I spent a lot of time watching boats in front of us to get used to tracking wind shifts early (I expect to be in the back of the fleet).

On the run back home, we surfed into some mid-6's, asserted our right-of-way with aggression, and had some of the sloppier jibes in recorded history. It's not like I'm saying we'll actually win a race but we're going to look good correcting out in front of everyone.

Thanks for not mentioning my scream as we hiked up (or whatever you call that near death experience). Note that you may have found your fourth crew person-Kathy (a far better sailor than I-though that's damning with faint praise) is interested in the race. I know girls and boats don't mix (I thought I heard someone on the dock say that), but what do you think?

girls and boats definitely mix. just not pregnant girls in choppy waters. kathy should do it!

Crew of four? Time to start looking for a 30. I would rather help you look than take on the 18 foot
power boat project Marianne put me on to. Yuck!

And yes, the toe rail in the water was fun. What was that scream I just heard.

Mr. Gibbs: No, it's frightful bad luck to have a woman aboard.

Jack Sparrow: It would be far worse not to have her.