Intersection of Life and Sailing

This blog is primarily about sailing. Given the choice, I'd have so much to write about that my 14-26 readers would have to subscribe to EVK4 Bloglet Digest to find the time. But, family and work responsibilities keep me from being a full time sailor.

But occasionally, life and sailing collide into a beautiful day like this: 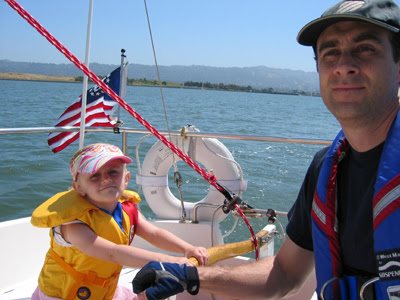 My wife, daughter and I went out early this morning for a sail before the thermals kicked in. About 10 knots of consistent breeze, very little chop, and one accomplished helmsman later, I felt like life was complete. But enough sailing poetry, that stuff belongs here.

Sailing Anarchy had a running commentary on what they called "The Look". Basically, it was trying to decipher the perfect union between form and performance. Of course, mostly they were looking to make fun of people who couldn't sail, but that doesn't concern my nomination for The True Look of the Kickass Sailor: 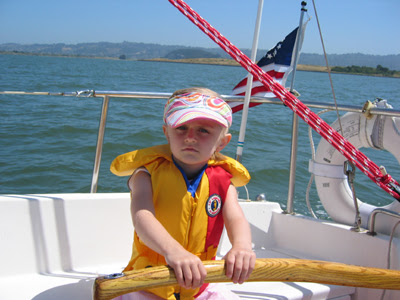 I wouldn't want to meet her on the wrong side of the racecourse.

Speaking of a racecourse. As we were heading out of the marina we spotted some trouble ahead. A big ass motoring Catalina 36 was trying to run down a sailing J24. Never mind my preoccupation with rules of the road, as the J24 had to tack out of the way, the freakin' Catalina turns her attention on us...we were motoring so I just swung way out of her way. As the scared-to-death helmsman looked over at us wondering what she was doing wrong, she almost collided with an Olson 25 heading out from M dock. Holy crap, this woman was like a one-boat demolition derby!

As everybody scattered out of her way, normalcy slowly returned on the way out of the Marina. I take the north exit, figuring she was going south, but lo and behold, they follow, just a slight bit faster than we were going. Crap! I rev the outboard to some intolerably loud level to scoot out first, wanting no part of her dangerous ways.

We make it out a bit before her, move out of the way to get our sails up at about the same time they unfurl their jib (they had the main up already). They get going a bit before us about 100 yards south of us, a safe distance. We set a course for "C", my daughter's favorite racing mark, and try to pay them no more mind. That would have been a lot easier if it wasn't painfully obvious that my daughter was sailing our 22 footer about a knot faster than their 36 footer on the exact same course. You can call that Smoked on the Water!

Despite the freak woman on the Catalina 36 who struck fear in the heart of this pregnant woman, what a great sail today!

Great photos. Looks like your daughter is learning to enjoy sailing at an early age.

"The Look" is very important. Some years back I attended a racing clinic run by Gary Bodie. The first thing he taught us was "The Look". And when I teach kids to sail I always tell them about it. It really works.

I also tell the kids to smile. It is meant to be fun. Your daughter looks really worried in that photo of her holding the tiller on her own.

I think she's concentrating on that puff to port.

Seriously, I think she mostly mimics how I look when sailing; we have two pictures of the two of us from Saturday where she looks like a 4 year old mirror image of me (except for the pink skirt and braids).

She has that squinting grimacing pounding into the sou'wester helmsman look down pat. I went back through the albums and my Dad has it too.

CRK rocks. You're a good dad.

Great story and photos. I tend to run into that woman or a good facimile of her whenever I sail. Throw her over the side into a longboat and have done with her!
The Horse's Mouth.

I saw that same catalina wing nut helmsjerk on I80 the other day. She has trouble driving and sailing.