A Tale of Two Sails

Memorial Day Weekend...three glorious days off work, two of which have sailing on the schedule. I don't have some grand over-arching storyline here, just two sails separated by less than 18 hours that were drastically different.

Friday night, Bob and I go down to the Marina to enjoy the 20 knot winds. We raise sail in the Marina and are tacking happily out. For some odd reason involving a motorboat, we decide to take the North opening out. The southern opening would have been much easier, but that motorboat just didn't cooperate. 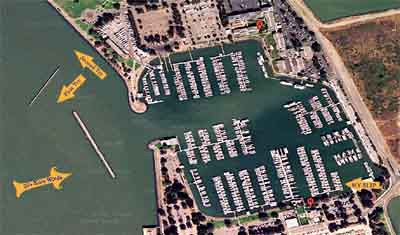 We decide to take the first opening (cleverly labeled first try) which is a Bad Idea. First thing we find out is that the water isn't as calm as it apppears in the marina. We knew about the wind but I, for some reason, didn't anticipate the 3-4 foot chop.

But anyway, we're sailing. So port tack to the first wall, starboard tack to the second wall will not clear, and in the attempt to pinch just to see what happens, we get locked in irons. Now with that much wind, the rudder takes control very quickly and a tiller operates backwards when your sailboat is going in reverse so we suddenly find ourselves on port tack again heading for a big wall. I yell, "run run run" which to me means, "let out the sails, run downwind and we'll go around this hunk of concrete". To Bob it meant, "what the hell are you talking about?". We quickly switched spots, I took the helm and we made it through the other opening, titled "second try" above.

I'm not a racer, I did not have to be out there if it wasn't fun. This was not going to be fun. In a very official voice, I proclaimed, "We will live to sail another day." If Bob weren't holding on for dear life, I bet he would have hugged me. We actually sailed about an hour outside the breakwater and were drenched before we could get the foulies on but even that wouldn't have helped. It was miserable out there*.

So that brings us to Saturday morning. We get out before the big winds and chop start (I love how predictable the Bay is) and enjoy the most amazing sail. First off the bat, we take the freakin' Southern Exit. We spy a J24 about a hundred yards ahead of us and reel her in, passing with a mighty cheer. Of course, it was a sailing class that might not have realized we were racing. Doesn't matter, our little Catalina 22 with just a 110 up front kicked their butts. Huzzah!

Now this was sailing, 10-12 knots of wind, tons of boats on the water and a video camera in hand. At one point, on starboard tack, we were in a somewhat close situation with a port tack Island Packet. No real worries about hitting, but we were close enough that they noticed that on a close reach we had a crew member on the leeward side of the bow while I was having a bit of time keeping the boat balanced. If they were cartoon characters, we would have seen big yellow question marks floating above their heads as they stared holes through us trying to figure out what we were up to. What they obviously didn't know was that I'm filming an epic version of "Smoke on the Water" and needed footage with boats passing our stern while we heel excessively. Not good seamanship for sure, but you have to make sacrifices for your art. I'll send them an invitation to the screening maybe.

The Bay Area being what it is, we had an appointment to keep in the mountains that afternoon so we headed in. Not even a thought of firing up the outboard, a 2 for 2 weekend for sailing into the slip. Huzzah!

* side note, on Saturday morning there were a LOT of spinnakers being hung out to dry around the marina from the beercans. We weren't the only ones struggling to stay dry.

Great post! I love this passage, "I'm not a racer, I did not have to be out there if it isn't fun. This was not going to be fun. In a very official voice, I proclaimed, "We will live to sail another day." If Bob weren't holding on for dear life, I bet he would have hugged me."
It left me in stitches.
Joe aka Horse