I have no idea why this is so exciting to me. My 22 foot sailboat topped out at 7 knots once and that was only with a hell of a current assist. But the Transatlantic Challenge is starting May 21 and features two bad ass maxi-yachts, the Mari-Cha IV and Maximus. These two boats are ridiculously fast. Maximus claims to have gone 27 knots in an 18 knot breeze while Mari-Cha IV owns the current transatlantic record.

I have to root for the Mari-Cha IV though. First reason, their PR firm sent Camille an autographed photo of the MC4 when I sent them the picture below. 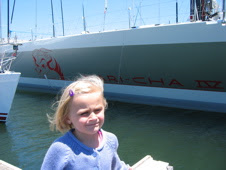 And don't even get me started on the possibility of BMW/Oracle racing winning the America's Cup and me getting to race Polka Dot against those beasts in 2011 on San Francisco Bay.