About the time I was badly out-coached

A new season ignites past memories.

My team (the Red Sox) shared a practice field with the Giants. We had the north diamond they had the south. It was friendly and since practice was WAY TOO LONG for 5 & 6 year olds' attention spans we would often have a scrimmage for the last 30-40 minutes against the Giants.

This time, though, we hadn't made any plans for the scrimmage since it was the last practice of the season. My plan was simple, make sure the kids could see how far they'd come in the past three months. Take them through the first practice plan and laugh at how lame it seemed compared to where they currently are. Throw in some congratulations and enthusiasm and just play baseball.

But when I looked over at the Giants' side of the field, I felt even more pride in how far I'd come as a coach. Michael, the Giants coach, had a freakin' igloo cooler on the mound instead of the customary ball bucket. I distinctly remember thinking, "rookie" and chortling to myself. 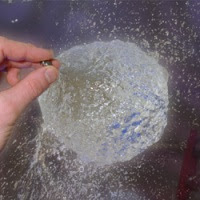 Then he opened the cooler and started an all out water balloon assault on his team. My pride was revealed as hubris and his team became better than mine. Instantly. My kids looked over glumly as the joy of a well executed 6-4 putout paled next to a gigantic team-wide water balloon fight.

My well-crafted year of sunflower seed spitting lessons, take me out to the ballgame renditions, and superstition learning crumbled next to the last-practice antics of the Giants. All year long I could feel that the Giants preferred to be on my side of the field for our half-squad scrimmages. Gone with one well-executed water balloon fight. Heck, I wanted to be on the Giants for those ten minutes.

All I can do now is plan for next year. Keep all of my same gimmicks, hope for a warm day on the last practice, and try to think of one new one. Something like pitching ripe pears to an unsuspecting batter or a life-sized zombie first baseman statue with the first kid to knock his head off with a throw from shortstop wins a prize. Something like that.

I'll never win back next year but I can make sure I never get out-coached like that again.