Loose ends to tie up before the Pacific Cup

The Pac Cup is less than 50 days away and I am starting to feel like it's real. In 2008, I didn't start keeping a journal until start minus 30 days; this year I'm going to start earlier. Maybe tomorrow. 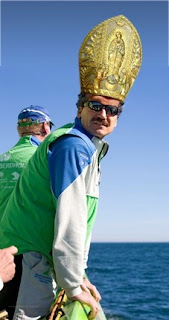 But in preparation for this epic bout of journalizing, I pulled out my old journal with the intention of just adding on to it. I did a quick scan and the first thing I noticed is that mid-way through I declared Paul Cayard my mortal enemy over a perceived mid-ocean VHF slight. He apparently didn't respond to our hails on 16. In retrospect, I now know that it wasn't even him so I have a dilemma ... sworn enmity can't just go away without some sort of ceremony or a declaration or a writ handed down by the city council. What am I going to do? I assume I have to have this resolved by July 5th.

And that's just one thing on a long checklist. I have to get a new headlight since Noah has been using mine to look under his bed for the last two years. I need to avoid having another day of seasickness. I have to plan my flight home. This is not going to be an easy 50 days if I have to add in some sort of Paul Cayard enemy reconciliation project.

I guess looking at the entry list and seeing if the boat that was most likely responsible for the VHF slight is entered would be a good start.  I can transfer my grudge to them and plan some sort of revenge.  You know, like snubbing them at the awards ceremony or giving them stink eye when they pass us.

Ultimately, it's good for me to have an enemy in the race so I will most likely transfer it.  Maybe to some random boat that won't expect it.  Sun Tzu style.

Amazing. When did you return to this planet?

Welcome back to the real world. Where have you been?

Wait a second, you guys haven't been reading my swimming and Active Directory blogs? They're just as good as sailing, really.

Is this a new sailing blog??

I don't know whether its's going to actually be about sailing; I'm thinking about taking up powerboating...I've heard you can put an engine on a boat and have more fun.

Please keep up Edward. The powerboat craze was last week. This week it's all about cheesesteaks.

Verification word: quition. Opposite of stiction. Act of quitting one of the essential tasks of life such as updating a blog every day.

I think a simple verbal apology from Cayard should let him of the hook. No need for lawyers and formality, the Pac Cup is a corinthian affair after all.