After Christmas dinner, I was mentioning to my cousin that I'd heard it was a sensational crab season and that we should go out soon. He's owned his fishing boat for about 4 to 5 years and I had never actually taken him up on an invitation to go fishing. Then he asked, "what are you doing tomorrow?" I guess I was going to go crabbing. Crabbing on the darkside.

The darkside means a stinkpot in case you haven't been following this blog for the last five years.

Well, hell's bells, it turns out that fishing boats with a 250 on the back can be fun. And painful. Ocean swells that are benign and fluid to a sailboat are bone-jarring when going 35 MPH. Other swells that would kill a sailboat are easy-peasy on a planing powerboat. Either way, we got out to the crabbing grounds significantly faster than we would have on my Newport 28.

Once there, we dropped our 3 pots over preparing to do battle with the biomass 100 feet below the surface. Then we just kind of waited. And discussed the storm that was coming that made both of us very uncomfortable. And we finally called the wait off so that we could get back in before the swell made the Gate an unpleasant place.

The first pot I hauled up. As it broke the surface I counted FIVE crabs! As it got on deck, we both counted five SMALL crabs. Well, it turns out that heaving an undersized crab back in the ocean is a bit of fun too. The next pot, Arthur did the honors and brought up FOUR undersized crabs. Tossing these back in was not quite as fun.

Then the good pot, the round one with a bungee cord, had its turn. I pulled it up and counted FIVE crabs again. But this time TWO were big enough to keep! We did it, we successfully crabbed! 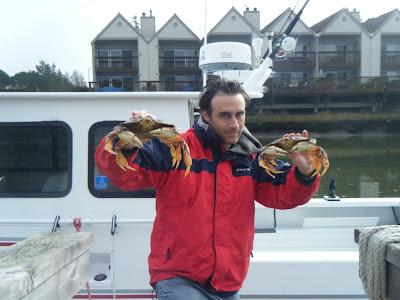 There was a lot more to the day like seeing 12-15 foot swells breaking offshore in the Bonita Channel, the earnest warning about not letting a crab get its claws near your aorta, the multitudes of dolphins (or porpoises), and the incredible teamwork that helped grab each pot on the first try all four times. But, really, I just wanted to get a picture of me holding two crabs out on the interwebs to get this blog back on track.

Back when I was much younger, one of my old-time skippers told me that crabs had the most even disposition of all marine creatures.

Oh man, this post is as scary as one of those Deadliest Catch programs on the Discovery Channel.

When and where were you crabbing? We went to Dillon Beach yesterday (12/27) and watched the USCG boats practicing in the huge surf -- I wouldn't have wanted to be out there!

I suppose the area between Bolinas and Point Reyes would have been somewhat protected, but the buoy off Pt Reyes was reporting 15ft+ waves:
http://www.ndbc.noaa.gov/show_plot.php?station=46214&meas=sght&uom=E&time_diff=-8&time_label=PST

Do you trim the neighbors' shrubbery?

Valis, we went out Saturday before the storm and were just seeing the beginning of the swell. Our plan all along was to get back in before things got hairy. Seeing swells break in the Bonita channel was pretty freakin' creepy when you realize that's where they expect boats like ours to go.

I'd tell you where we crabbed but I was sworn to secrecy as to the location of the clawed biomass.

Jheeze YOu call that Crabbing!!

Crabbing is where you sit on the edge of a pier and lower a string with a piece of meat tied to the end, slowly into the water . Then watch and wait for a crab to take the bait and slowly slowly slowly pull it up an drop it into a basket. Where is the sport, the skill in pulling up a caged trapped crab who cannot get away, to a sinkpot no less!!! Sportless wimps, jheeze. My God,have you no shame?!! Next you'll give up the sailing blog and go swimming...oh wait you did that already, heheheh my bad (^_^)

Zen, you heard the part about the swells and the claws and the exposed jugular, right? Crabbing is not a kid's game.

Ouuuu, yeah, I totally forgot about the terror parts! Also you holding those wild beast in your bare hands, awesome! So manly! I'm sure the mrs, got all short breath and weak knees when see saw that picture... My Bad, what was I thinking !

Too funny, I'd better pinch myself.
Carefully, though.

Wouldn't want to make to much claws for alarm.