Day 9: Whither the Weather 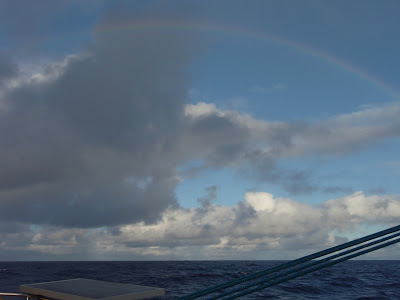 Garrett and I had an incredible 3A to 6A watch. The boat was basically sailing herself so all of our attention turned to "what the hell are these squalls and how can we take advantage of them". We had a pretty moonlit watch so we could see the squalls forming, flick on the radar for confirmation, and just watch how they traveled. They weren't the storm systems we were used to; they would appear and disappear as if by magic (actually as cold air dropped from the heavens above but it seemed like magic).

Once the magic happened and the squall would form, we'd feel the cold air, get a lift, and sail faster for a while. It would then disappear, our course would drop back, and we'd be back to slower sailing. This night we never got the rain but we could see it. This understanding was really the beginning to how Garrett and I would deal with these beasts the rest of the race. 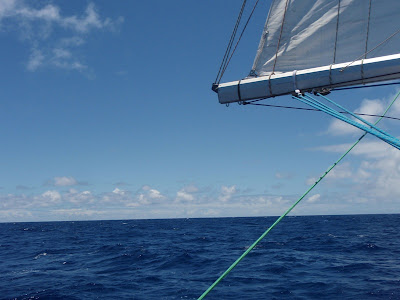 The daytime weather was hot. Hot weather means everyone showers. This is very good for the general odor of the boat...showers are good. We started getting real tradewinds on this day, 15+ knots and its accompanying boatspeed, and sunshine. Great sunshine. But we tried to stay out of that sunshine, heading for the cloudcover...Sail in the Shade! Not only is it slightly cooler but the boat is faster. We finally got to 1020, probably not coincidental that the winds were picking up. 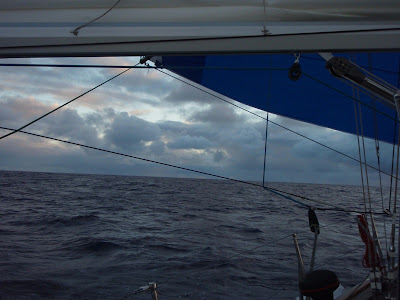 The boat was mostly being driven by autopilot. Any time Otto could handle it, he should. This gave us all plenty of time for important philosophical matters. One disagreement that wasn't resolved until we got to Kaneohe: "Is Paul Cayard attractive?". I'm in the camp that he isn't; Darren is on my side. Phil thinks he is. Charlie just wouldn't commit. Lissa didn't know what he looks like. The decision was made that Heidi would have the final vote in Kaneohe. Just as she was looking at him, saying he looks too French, I changed my opinion. He is good looking. There, I said it, "Paul Cayard is an attractive man." I hope he reads this too. 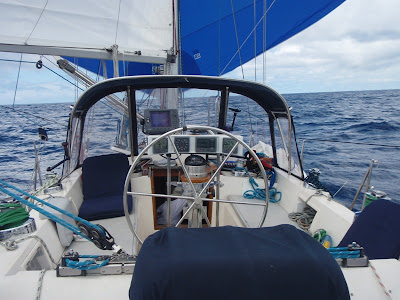 Back to the autopilot, why don't they have remotes for them? If I'm going to steer comfortably, why should I have to sit up to turn the clickwheel? 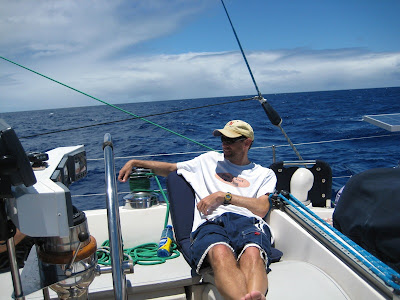 My final 9P to Midnight watch was moonless and, I thought, cloudy. I kept thinking what are those odd wispy clouds? They don't even seem to be moving. Garrett took a break from navigating for a while, came up on deck and said, "wow, look at the Milky Way". Holy crap, it was so thick that I didn't even recognize it. America's public school system, got to love it!

Final note on the day. One of my (and Phil's) documented favorite spots was the bow pulpit. Beautiful shots like my taffy-chewing video were shot there. But people can get a bit surprised to see you there. Darren was trying to have some off time taking artsy shots and got surprised by me. I love this sequence. 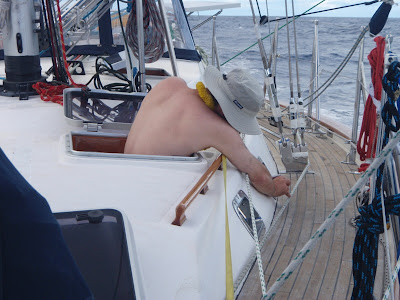 Who the hell is bothering me? 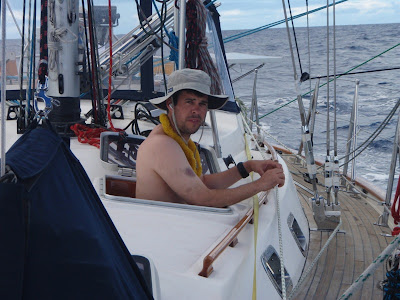 Oh, crap, he has a camera, wave and smile! 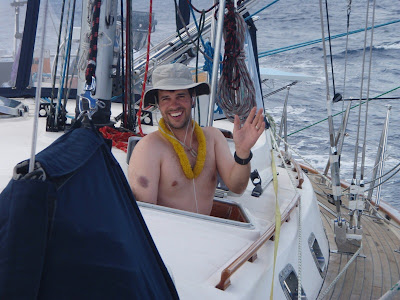 That's life on the ocean.

So apart from getting stoned on limoncello and taking pictures of each other naked, what did you do for fun?

Well, considering you just described the perfect day sailing, I can't think of another thing that we did.

How about some video of drunk, naked sailors singing sea shanties?