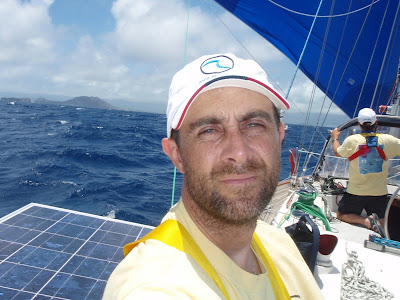 Last I left this story, I was warning that it would be a crazy night. We had spent the day wet and squally, the night before had been super-squally, and we wanted to be ready for it. There was less than 24 hours left in the race so it was time to double up the watches. Figuring that if we went 3 per watch we’d have plenty of hands on deck to gear up and gear down quickly as the weather changed, we added Darren to Garrett’s and my watch and Lissa to Phil and Charlie’s. We were ready for a crazy night.

A crazy night that never came. The night was as beautiful as the day had been wet. Absolutely gorgeous views of the stars with only a slight moon. No overcast at all, in fact, no squalls even on the horizon. It’s like the tradewinds said, “enough, these guys passed” and gave us a bye for the night. The extra people on watch just gave us more people to talk to. Garrett and I stretched out and watched for shooting stars while Darren drove. It was sensational. Heck, we even saw a satellite go by.

Dawn perked up and the day continued as beautiful as the night. Watch schedules were shot to heck as we got the boat ready for landfall. I’ve hinted at my deteriorating confidence level in my driving towards the end of this trip, the last couple of watches I’d let Darren do all the driving and Otto wasn’t pulling his weight at all. Darren, perhaps inadvertently, did the absolute nicest thing anyone did the entire trip for me on this morning. Charlie asked him if he needed anything and he said, “yeah, I need Edward to drive for a bit while I go pack my bag.” I grabbed the wheel and started “surfing” the waves, holding a perfect course for over an hour. I seriously needed that confidence boost.

One of the most common questions I’ve gotten was whether we saw other boats and oddly enough, we saw a bunch on the first day, a bunch on the halfway day, and one just as we were about to hit land. Nothing in between. But we did see a helicopter! While I was in my confidence-building super-DDW-helmsman mode, I saw a speck on the horizon. And it was coming right at us! A freakin’ military helicopter decided that we were going to be part of its wargames, buzzed us at wavetop level, maybe 50 feet in front of us. My big worry was that it would give us some crazy backwind and round up the boat but all it did was zoom by and give a great photo opp. 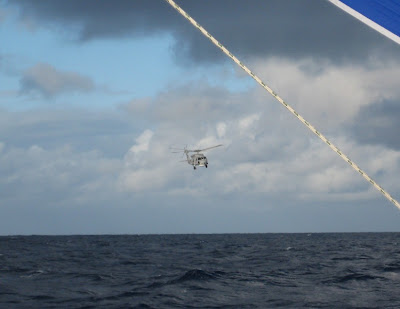 I finally gave up the helm and took my turn cleaning below so the boat would be nice and shiny when we made port and then took my position for the arrival. Chief Archivist, snapping pictures and shooting video. It seemed an eternity that we knew land was “right there” but couldn’t make it out through the clouds. Then, boom, there it was. Land Ho!!!! 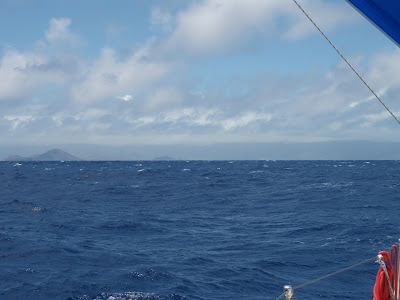 The finish was hilarious. My main job was to take video of the finish so I thought the whole thing was funny. Nobody could find the marks. At one point, I pointed out a government mark and that gave hope that we might eventually find the finish line mark but nope, no luck. The wind was howling at 25-30 knots, the waves were very big and there was just no hope. Anybody with any less strength than Phil would not have been able to control the boat, it was incredible. 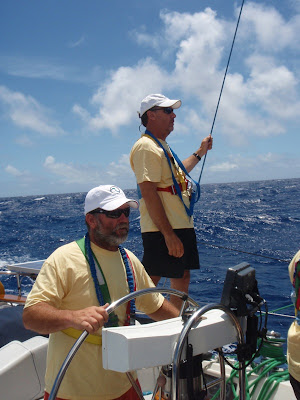 When we finally were able to head a bit more DW near the finish line, Garrett took the helm (he should be the one to finish the race after all) and Phil went below to watch the radar and GPS. Finally, we heard Phil yell, “we finished” as the GPS showed us past the line. I called out the time “15:25:05 PDT”, Garrett radio’d it in, and just then Charlie yelled, “hey there’s the mark!”. 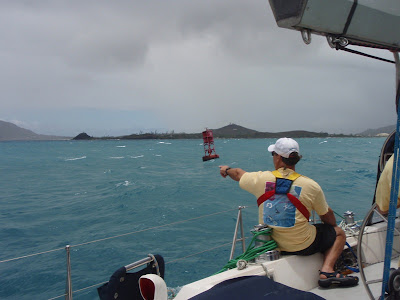 Please note that you cannot see the mark in this picture either!

The family met us at the dock, I ran off the boat and we had sailed to Hawaii. 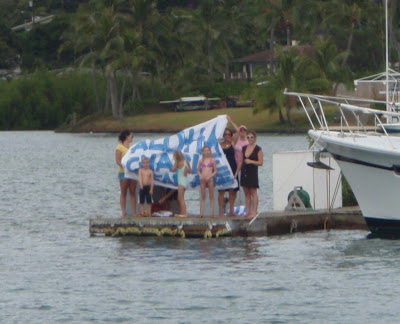 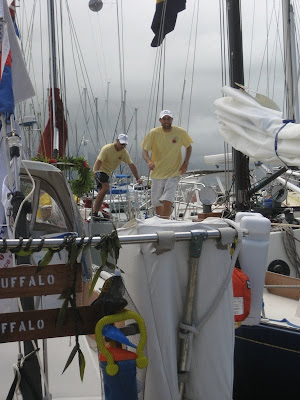 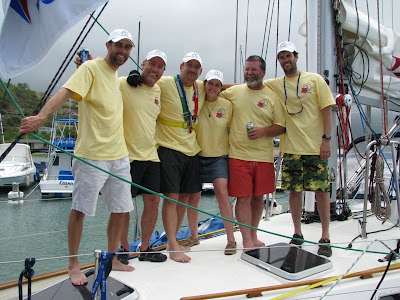 Congratulations. You are my hero.

Before you publish the memoirs of your voyage I suggest spicing it up with a bit more terror (or preferably a lot more terror). Couldn't you pretend that the mast fell down or something? Also the book will definitely need to be embellished with some tales of drunk naked sailors singing sea shanties.

Tillerman, I owe this to you. That's a link to be proud of!


I'm pleased things went, and clam. It will be good to tell the wife of this... however for the book version I have to agree with T-man, it will not sell like this.

And what will be the title of the book?

"Weeks of Terror Interrupted by Moments of Sheer Boredom"

Has anyone bought the movie rights for "See Me Eat Salt Water Taffy" yet?